Builder pattern seems to be one of the most versatile patterns of all creational patterns. Its role is usually underestimated and it usually goes unnoticed among other easier for understanding creational patterns: Abstract Factory, Singleton, Prototype. Further I suggest to review some of variations of Builder pattern. In certain cases the variations bring the pattern closer to Visitor pattern. In other cases the modifications bring it closer to Abstract Factory pattern. Nevertheless the way it is used stays the same. All the variants give us fine tuned control over the dependencies and modularity of the code where the Builder pattern is used.

Classic applications of builder pattern is presented on the class diagram 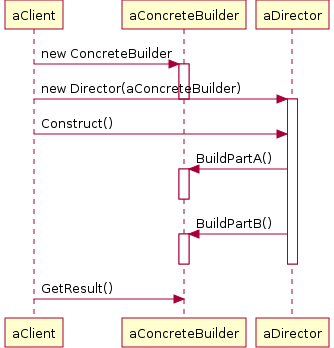 illustrates the relationship of builder and director with the client. This variant of Builder pattern can be used in a code that is responsible for building charts of arbitrary format:

Modifications of The Pattern

In common practice we can encounter modifications of Builder pattern that allow us to manage dependencies inside the project in various ways. The modifications fall into different categories based on the location of GetResult method call and on the number of directors.

Variations of Builder pattern can be classified based on the location of GetResult call. GetResult method can be called either from the director or from the client.

If GetResult method is invoked from the client then this variant is for abstracting out the director from the implementation of resulting object as it’s represented in the classic case.

The Number of Directors

Variations of the pattern can also be defined by the number of directors.

There may be no directors. In this case Builder pattern is used as a constructor with named arguments. Client and director are the same entity.

If there is one director then it leads us to the classical variant of Builder pattern for abstracting out the product construction from its concrete implementation.

There may be more than one director. Everyone in the chain of directors sets the parameters that it knows about and passes the builder to the next director. This variant of Builder pattern reminds more of Visitor pattern. Pattern Visitor is usually used for handling Composite pattern. In the case of Builder pattern the visited objects can have arbitrary nature. Here is an illustration of the case with several directors: 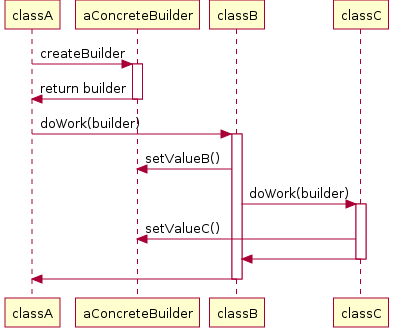 Features of The Pattern

One of the main reasons to use Builder pattern - inversion of dependencies. The builder is passed to a director during construction, what ensures isolation of the director from the implementation details of concrete builder.

Another reason as it’s specified in [2] to use Builder pattern can be a lot of arguments of the class being constructed. Let’s take a look at a piece of sample code.

From this code it’s clear that value1 becomes A in the new product, and value2 becomes B. It allows us to change the order of arguments in the invocation. Named arguments make the code more readable. The invocation of method GetResult is done by the director itself, which is also a client. Builder’s role here is similar to the role of AbstractFactory pattern, but unlike AbstractFactory pattern, who’s task is to give access to construction of construction of a group of connected objects, Builder is focused on construction of instances of only one class.

This pattern also allows us to configure builder as we receive data necessary for configuring it. So the construction can lapse in time instead of happening at once as it’s done in factories or constructors. Builder pattern tracks the consistency of the object being constructed and if some of the arguments are missing it can throw exceptions or execute any other action required to inform about the incomplete state.

Then method GetResult can be invoked when the builder is returned back to the client from the chain of invocations inside directors(in the beginning of the chain) or by the final director(end of the chain).

Tolerance for Change of Data Format

If Builder pattern is used as in sections Loosening Coupling and Several Directors then if we need to collect more data we can use new methods only where they are required keeping the rest of the chain of directors intact. Instead of getting data through get methods sometimes it’s more flexible to pass Builder pattern.

Let’s illustrate what we described above in the case for several directors. Method GetResult can be invoked by classA as well as by classC. In both cases classA and classC can’t know anything about each other’s dependencies, what reduces dependencies of each of them, but gives them access to the required object. In addition to that classC receiving partially configured, can change only the part he knows about and as a result receiving different objects depending on the requirements.

The latest approach is particularly convenient, when the client class requires different instances of a class depending on the data that client class has, but IOC container restricts access to constructors.

Builder pattern is a sufficiently powerful and flexible instrument for dealing with dependencies inside a project and inversing the dependencies. Regrettably, the usage of Builder pattern requires writing a lot of boilerplate code. It complicates effective usage of this pattern in modern programming languages.

As Rob Pike appropriately mentioned in his presentation at OSCON 2010: patterns - are usually solutions whose implementation is missing from the language. We can only hope that working with builder pattern in future languages will be as simple as just writing a constructor.